Mr. Frank Kiezkowski moved to Austin from New York City after attaining the rank of shodan in kendo at Ken-Zen Institute under Kan-sensei. Frank received permission from sensei Torataro Nakabara of Los Angeles, CA, with support from Mr. Darrell Craig of Houston, Texas, to start Austin’s first kendo classes offered to the public. Through the University of Texas “Informal Classes” program, kendo became an outreach program to expose the Austin, Texas community to a relatively new martial art. Frank recognized the potential of Austin and the University of Texas as an environment where kendo could flourish and grow. Frank began classes in December of 1980 with only three students, but by the Fall semester in 1981, membership grew to 30+ new students.

September 1981 was Komizu sensei’s first visit to Austin. The Austin Kendo Dojo continued to flourish and grow under the leadership of Mr. Kiezkowski until he moved out of Austin in December 1985. Then in January 1986, Komizu sensei was convinced to move to Austin from Houston, Texas, to assume leadership of the group.

Komizu sensei wanted to solidify the group and give it a greater sense of identity. At that time, the group consisted of approximately half UT Faculty, staff, and students and half non-UT affiliates. Through a series of meetings, the group’s name was changed from the Austin Kendo Dojo to the Austin Kendo Doshikai (“people of a like mind”). A new “mon” was designed for the group with a star in the center and fifteen surrounding tsubas. This was the 150 year anniversary of the formation of the State of Texas; hence one tsuba for each ten years, and the star representing the solitary Mexican territory which became the Lone Star State of Texas.

On January 17th, 1987, the Austin Kendo Doshikai was officially voted into being with a name change by Executive Committee and later approved by general membership so that it more correctly corresponded with the intent and purpose of the group created. The purpose of conceiving The Doshikai was and still is, “to discipline and cultivate the human character through the application of the principles of the katana.” 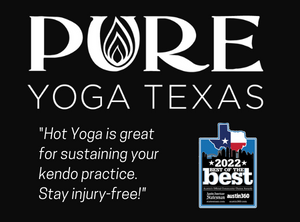